I have a treat for you today! I’m happy to showcase a cool new product by an indie author friend of mine, Annie Douglass Lima. I’ve featured her books on my blog before (you can read the posts here and here). Today’s post is all about her coloring calendar Hide It In Your Heart in 2019. 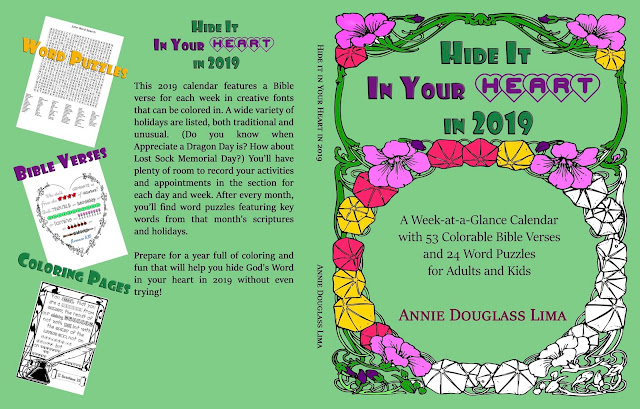 This 2019 calendar features a Bible verse for each week in creative fonts that can be colored in. A wide variety of holidays are listed, both traditional and unusual. (Do you know when Appreciate a Dragon Day is? How about Lost Sock Memorial Day?) You’ll have plenty of room to record your activities and appointments in the section for each day and week. After every month, you’ll find word puzzles featuring key words from that month’s scriptures and holidays.
Prepare for a year full of coloring and fun that will help you hide God’s Word in your heart in 2019 without even trying!
Click here to buy this 2019 coloring calendar from Amazon now!
Now take a look at some sample pages! (In the actual calendar, each page is 8 1/2″ x 11″.)
Clicking on a picture will open up a PDF of the left-hand page (just the part with the Bible verse, not the calendar week) that you can print and color.